【日本語はこちら】
A couple of days ago, to search my favourite photo, typed in 'Solo & Illya' to google.

Here came the images of the beloved pair, Solo and Illya but then, found images of the new film version - Henry Cavill and Armie Hammer, in those photos popped up. Honestly, shocked to spot them.... 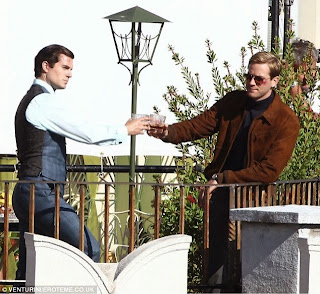 Urgh!
Yes, it is certainly Solo and Illya of the new film. BUT it is not right!!! Or it is just me being too petty minded?

The photo yet instantly reminded me of the shot below.↓


Look at the original Solo and Illya! They are quite sophisticated and sweet, aren't they?
You see the distance, as well - a lot different. Will those two bulky lads achieve such a lovely pairing one day?

Yet, there are voices saying that the new films are full of subtle homage to the original series the Man from U.N.C.L.E. in contrast to the Kingsman's "obvious" ones. Or are they simple co-incidences?

Let me pick up the findings from the long waited trailer of the new film.

Gaby(Alicia Vikander) pushing down Hammer-Illya looks just exactly like Miki in the Her Master's Voice Affair.  And both Illyas threat the fawning young ladies with spanking.

Look at the shiny, stunning beauty of Illya by David McCallum. It is not fair to ask any young actor to be like this for the new film.

Went further on googling, to find this. I did not remember this scene so well, though, another coincidence in the new film?

Both young ladies jump on their Illyas respectively, afterwards.

Hammer-Illya on motorbike!  Wow!  Mr. Hammer looks very good. With his well built body and today's shooting technology, this is pretty cool. The dynamic of the photography may be an homage to the Great Escape, but it reminds me of Illya failing his mission in the Deadly Toys Affair.

Now, why don't we pick up whatever rings the bell?


It did not strike me but said.

A new iconic scene with Illya this time? Personally not impressed, rather dislike this. Because :
a. The original Solo is very confident, but Hammer-Illya looks sad in a dim light.(or in darkness. The image lightened.) ;
b. The shots were done by (Cavill) Solo. BUT it is something Solo would never ever do!  Remember the Thrush Roulette Affair. Solo never aimed his gun at Illya even for a second, while instantly brain-washed Illya was shooting him.  That is the SOLO I love and worship.


Something I did not spot, but sure it is. 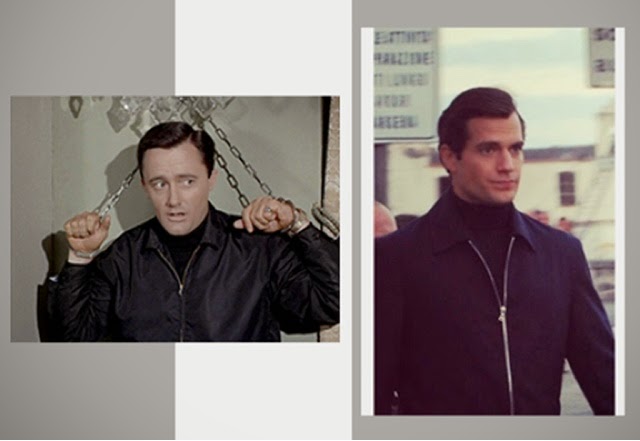 The same outfits. The site also mentioned the hidden homage, or Easter Eggs, whatever it is called. The Spy Command（元HMSS)

I should have been able to find a better photo with more resemblance.

The Cavill shot is right after a brief appearance of Hugh Grant, who hardly convinced me, was Mr. Waverly. Not quite sure if this smile was at Mr. Waverly, or at any ladies?  You cannot picture Illya in what Cavill-Solo sees.

Mr. Cavill did very well to portray Solo(except his shape!), but looks rather flat in his expression/emotion, compared to Robert Vaughn.  It makes me feel a little far-fetched -  maybe for a three minutes' feature, could not help. You would not include all the unimportant looks.

Another resemblance, but it may be odd or rather incorrect.
Richard Kiel who passed away last year is famous for Jaws with metal teeth in the bond film. He was typically cast as a violent monster. Bulky Mr. Hammer made me think of Richard Kiel. No offense. >.<

This is nothing to do with the new film.

NCIS Season 12  So It Goes.  Ducky's reminiscence. （Young Ducky and his best friend Angus) vs. "Original" Solo and Illya.
The young actors here are Adam Croasdell(left) and Adam Campbell(right).

This is obviously a wrong show but they created more resemblance to me than the bulky two leads. Maybe more convincing to have these two?  No, it will never happen. Let alone.

I cannot be more picky to watch the new film trailer. Overall I am more positive than before. More may come up, but I will call it a day now and out.